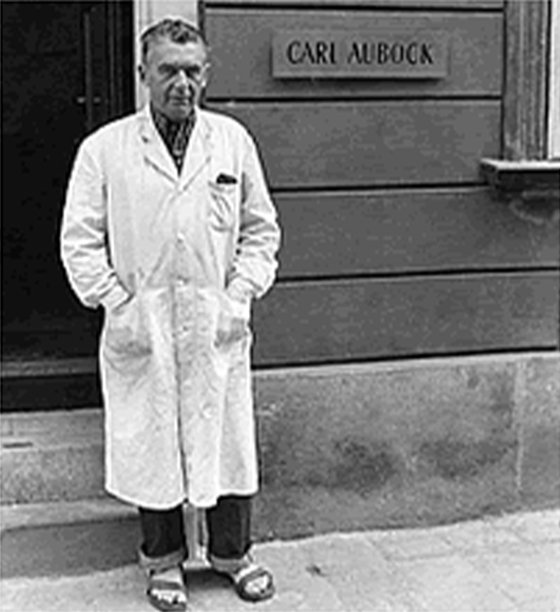 The painter and designer Carl Auböck is one of the most remarkable artistic personalities in Austria. After a varied apprenticeship, he took over his father’s workshop in 1926.  Initially focused on his customers from Vienna and the United States (Viennese bronzes, Art Deco) he created masterpieces of Austrian classical modernism.

At the beginning of the 1940s, he developed the unmistakable style for everyday consumer goods that made him famous at home and abroad after the war. The highlight was the 1954 Milan Triennale, at which Carl Auböck received four gold medals for his work. His models still form the core of the Carl Auböck collection. He began working with his son in the late 1940s.

After studying architecture in Vienna and the United States, Carl Auböck returned to Vienna. The concept of industrial design, almost unknown in Vienna, is visible in his designs for the workshop.

His friendship with Walter Gropius, Richard Neutra and others formed the background for his international design career in the 60s and 70s. International awards for his design objects followed – several Compasso D’oros from the Milan Triennale and several state awards.

In addition to working as a master class leader at the University of Applied Arts in Vienna since 1977 and his international commitment to architecture, design, product development and research, new models were constantly being created for the workshop collection.

After the death of his father-in-law in 1957, his wife Justine Auböck took over organization of the workshop. During this time, the company developed into a production facility of international standing. In the following decades, Auböck Design began to be offered at Tiffany, Saks 5th Avenue and Bloomingdales in New York, Neiman Marcus in Dallas, Christofle in Paris, The Ginza in Tokyo, Harrods in London. Drafts for new product series’ began to be commissioned by international brand companies and subsequently produced by the workshop – for Hermès and Pierre Cardin, Paris and I Regali Di Nella Longari, Milan, among others. In the early 70s, collaboration with the next generation began.