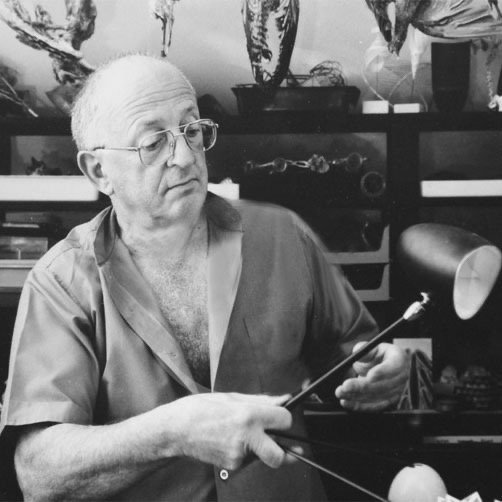 Born in Paris in 1922, Serge Mouille is now considered to be one of the greatest light fixture designers in the world. At a very early age he developed a talent for design and creativity and was the youngest pupil of his era to be admitted to the School of Applied Arts at the age of 13. Master goldsmith, Serge Mouille learnt the art of metalworking using a hammer thanks to his mentor Gabriel Lacroix and worked for several goldsmiths in Paris. His encounter with Jacques Adnet, Director of the Compagnie des Arts Français, marked a turning point in his career. In 1951, Jacques Adnet ordered a “large light fixture” from Serge Mouille for his South American clients: the first three-arm floor lamp was born. This innovative light fixture in black steel, shaped into organic forms, influenced his famous series of “Black Shapes” and marked the history of design forever. Serge Mouille’s status then changed from a master craftsman to a creative artist. At the beginning of the 1960s, Serge Mouille decided to take a radical step away from everything that he had created up until then by developing a series of light columns using fluorescent tubes. In 1963, he stopped producing light fixtures to dedicate his time to teaching. Affected by tuberculosis, Serge Mouille died in 1988 and his widow, Gin Mouille, decided to continue to keep his art alive by releasing his most emblematic creations under licence. Each example is manufactured in France by the company Editions Serge Mouille and features an engraved serial number, accompanied by a certificate of authenticity.