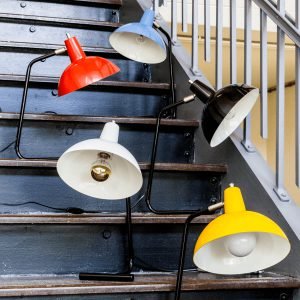 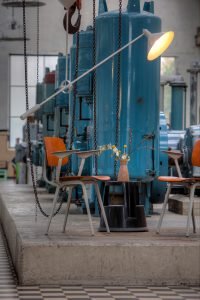 In 1906 Max Liebert took over a decoration company from Lessmann Moset in Berlin. Over the next 30 years he grew the business into a successful design and lighting company, consisting of 3 separate factories. But shortly thereafter, 2 of the 3 factories were taken over by the National Socialist government. The remaining lighting factory was then moved from Berlin to Almelo and at the end of 1933 and registered as Algemeene Nederlandsche Verlichtings-Industrie Almelo (ANVIA). Together with his son Werner and son-in-law Fritz Kaufmann, Max and Käte Liebert managed to rebuild their business in the Netherlands. Then, in 1942, the Liebert family was forced to hand ANVIA over to a German administrator. Max, Käte and their son Werner were arrested in 1943 and murdered in Sobibor and Auschwitz respectively.

Ilse, daughter of Max and Käte, and Fritz Kaufmann went into hiding and survived the war. After the liberation of the Netherlands, they were asked by the factory staff to restart ANVIA. It was a challenging time. Raw materials were hardly available. After Fritz Kaufmann suddenly died in 1952, ANVIA was handed over to be managed by attorneys-in-fact (in Dutch so-called Procuratiehouders) and entered into cooperation with an industrial designer from Haarlem, Jan (J.J.M.) Hoogervorst. This was the beginning of a very successful period in the company’s history. The Hoogervorst designs gave ANVIA renown international status. Many of his designs were pure and functional, yet very subtle. He designed for ANVIA until 1982.

In the mid-1980s, ANVIA was taken over by a Dutch window decoration company. A few years later, the ANVIA brand disappeared from the market. Then in the summer of 2014, 30 years later, the once renowned ANVIA brand and Jan (J.J.M.) Hoogervorst’s designs were brought back to life.

Shop all Anvia products by browsing the full catalog PDF, then contact us for pricing.

The Marionette On the Wall