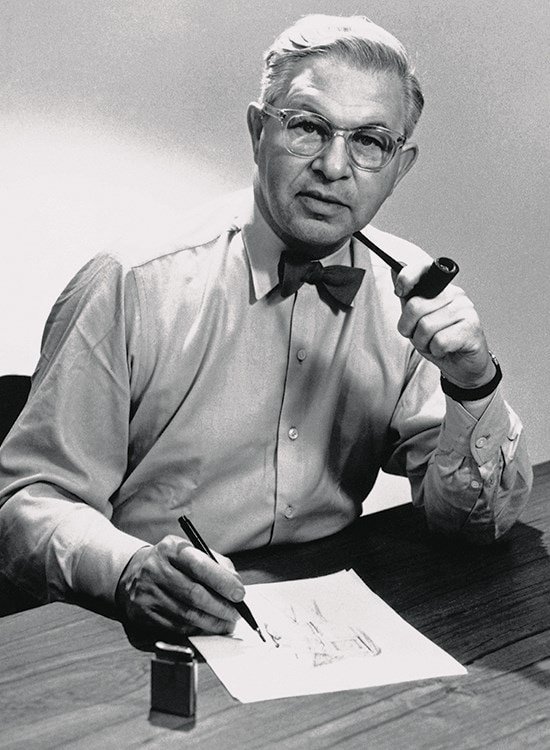 Arne Jacobsen is considered one of the fathers of Danish modern design. His work is one of the most personal and productive interpretations of Functionalism. Mixing it with Danish traditional aesthetic style, he created a modern and contemporary style. Jacobsen is one of the most outstanding Danish architects and industrial designers of the twentieth century. He introduced modern architecture in Denmark and contributed to its further development, providing it with versatility and a clear understanding of the functions of design. Arne Jacobsen was trained as a bricklayer and graduated from the Technical College in 1924 and the Copenhagen Art Academy in 1927. In 1928, among other projects, he received a golden medal in the academy for his project of a National Museum in Klampenborg. He combined his studies and working at the Fiskers Architects studio and, between 1927 and 1929, worked at Paul Holsoe’s studio. His first works are the reflection of Danish tradition, of the style known as Nordic Neoclassicism, with pure volumes, sloping roofs, brick façades of alternating colours. But soon, this Romantic-Nationalist style underwent the influence of the Bauhaus and Functionalism.

Jacobsen was an architect, as well as an interior and furniture designer. He also designed fabric and ceramics, since he started working on his own in 1930 when he set up his studio, until his death in 1971 (he worked even in World War II when, exiled in Sweden, he focused on the design of objects). Additionally, he was an architecture professor at the Royal Danish Academy of Fine Arts from 1956 to 1965.

His work reflects a critical regionalism, in which traditional techniques confronted his functionalist ideas. This resulted in a personal style that he carefully adapted to the scale and program of every project. Among all of his projects, two renowned buildings stand out: the terminal building of the Scandinavian flight company SAS, and the Royal Hotel of Copenhagen (1958-1960) conceived as a Gesamtkunstwerk (a piece of work that integrates various disciplines in art). For the latter, Jacobsen designed even the tiniest detail, from its sculptural furniture to fabrics and lamps (for instance, the Royal lamp edited by Santa & Cole) or ashtrays and cutlery. During the 60s, on the other hand, his most notable work was St. Catherine’s College, Oxford (1960-1964), through which he made clear his interest to control all of the elements of a building by combining architecture, interior design, furniture design and the design of any other necessary object. Indeed, Jacobsen understood his projects as “total design”, and thus designed the furniture and other objects of most of his buildings, as inseparable parts of them.

Some of the most acknowledged pieces of furniture by Jacobsen are the chairs Ant (1952-1953); the Swan (1958), a reminiscence of Henry Moore’s abstraction; the Egg (1957-1958), and the 3107 series (1955), still manufactured by Fritz Hansen. In his latest works, Jacobsen developed a special sensitiveness to detail, which gave birth to the more strict formalism of the International School’s third generation. His interior designs are simple, luminous, and delicate, with a certain ascetic touch. Jacobsen’s work has not lost, with time, a piece of its appeal and modernity, still being a combination of sculptural forms and traditional Scandinavian design, materials, and structural integrity.