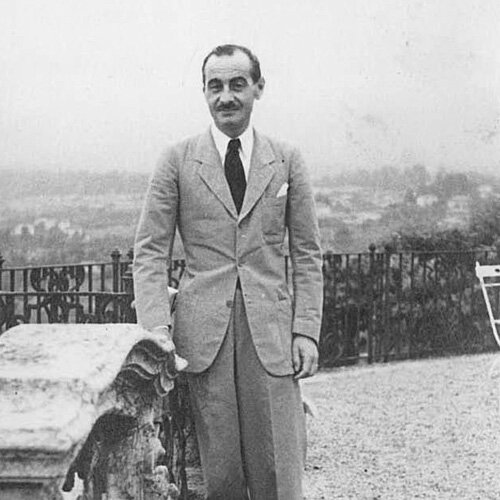 Corrado Corradi Dell’Acqua (Milan 1905 – Varese 1982) was a law expert, an amateur writer, and silently became a designer. His dachshund’s name was Azucena, after the gypsy of a Giuseppe Verdi opera. Azucena was also the name of the company Corradi had started in 1947, with two other young Milanese intellectuals, Luigi Caccia Dominioni and Ignazio Gardella. Gardella had already been his schoolmate at the Liceo Berchet, and would later join him in many other projects.

The premises of his adventure had materialized in two different editions of the Milan Triennial Exhibition. In 1933, Corradi had presented his black nickel and copper bookends, and in 1939 he had exhibited a silver and golden copper tea service wrapped in the coils of a snake. In those objects, the simplicity and the elegance of his future works could be foreseen but not fully recognized. Some years later he would have designed objects such as: lamps made with glass from Milan tramcars; a two-seat sofa for an intimate talk; saddle-shaped armchairs that forced the body in a perfect posture; a tree-shaped photo frame that could be worn as a cameo collier; a marble ashtray with pestle (at the Banca Popolare office in Piazza Meda, Milan), that could be used to put out a cigarette; his liquor cabinet, Brangania, made of wood like a plough and covered with natural leather; and his wardrobe Garitta, that seemed taken from a painting by Carlo Carrà. He designed everything starting from the house, with a precise idea of living in mind.