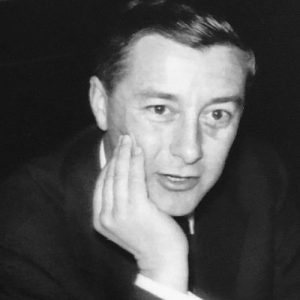 Born in 1926 in Bretagne, Alain Richard could have become a sailor, but his early skills guided him, between painting and architecture, to the National School of Decorative Arts in Paris. He joined the agency of René Gabriel, an emblematic figure of the aesthetics of reconstruction, and spiritual father of a new generation of interior designers. But the untimely death of Gabriel pushed him to found his own agency in 1952 with his wife Jacqueline Iribe, who created fabrics and specialized in color, and who he would work all his life. He then created Groupe 4 for Charron, one of the most influential collections of the time. He took part in major French and international exhibitions and collected successes for editions of the TV mobilier or for the Pierre Disderot Workshops. Public orders flowed, including for the National Furniture of which he is one of the most requested contributors, for embassies or for the train.

Alain Richard specialized in museum interior design . He oversaw more than twenty museums in France and in the world. This huge success led him to found Alain Richard SA agency in 1971 to carry out these large-scale projects. He led one of the leading graphic design agencies in France, which employed up to 40 people.

Pushing the rigor to the highest point, he is positioned among the most renown and most radical modernists. His minimal style, purified of all superfluous decor, uses simple shapes perfectly proportioned to the service of a perfect functionality. This scrupulous ethics of form is at the service of an uncompromising elegance that elevates aesthetics to a level of moral value. His talent garnered Alain Richard the most valued awards of his time, including the grand prize of the Triennale of Milan in 1954, in the Universal Exhibition of 1958, several gold medals from the SEAI, and the René-Gabriel award in 1964. He taught at ENSAD and advised the Ministry of Cultural Affairs. His intimate friendship with Pierre Disderot resulted in some of the finest, aesthetically and technically innovative French fixtures. Richard is without a doubt the most elegant French interior designers of his generation.