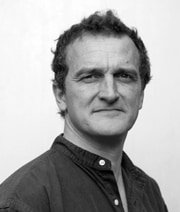 After sharing his first studio with a friend, Gonzalo Milá founded Milá Diseño, alongside his father and sister, Miguel and Micaela Milá. He designed the Rama street lights, edited by Santa & Cole, Ubidermis, which was awarded the Silver Delta in 2001. From that year on, he has had his own studio, where he practises rigorous essentialism and designs in a humane way, concerned about utility. Milá was born in 1967 and studied architecture in Barcelona. He started working at the same time in the interior and industrial design studio of Miguel Milá (his father), and also collaborated with Luis Victory, with whom he already won the 2nd Castilla-La Mancha furniture award for their Arragón espiga clothes stand. His experience with little objects, which allowed him to control tightly every step of the project, seduced him and led him to study industrial design at Elisava . In the early 90s Gonzalo Milá set up the Gòtic Sud studio along with a group of architects, designers and photographers, who recovered a large industrial plant in the old part of Barcelona to establish the studio. There he associated with Juan Carlos Inés, and founded the Inés-Milá industrial design studio. Those were prolific years, during which they entered many competitions and fairs, and designed many different kinds of objects: the Tutombas Pranha easy chair-system to stretch one’s back, awarded with the first price of the Valencia Furniture Fair in 1994; the Sillarga and Sicurta, two granite easy chairs for the Bogatell beaches in Barcelona; the Teula bottle rack; or the Mojón Segado boundary stone, a funny way to mark spaces in street cafés or street markets, awarded in 1995 by AEPD. After closing down the studio, Milá set up the Milá Diseño studio, where he worked for three years. Some outstanding projects of that period were the one of reconstructing an antique apartment in Gaudí’s Pedrera, and the series of lamps Rama (2000-2004), ADI-FAD Delta de Plata award in 2001 for achieving to cover any lighting need with a unified formal solution. According to the panel of judge’s words, “for the lamps’ versatility, that gives the possibility of adjusting them to different levels of height and orientations.”In 1999, Gonzalo Milá joined the Urban Division of Santa & Cole, where he collaborated in the production and edition sections. In 2001, he decides to work on his own in order to create what he likes most, furniture, and to invent “little things that surprise every day without gratuitousness, starting from new technologies or from applying traditional technologies to new concepts.” Más información: www.gonzalomila.com