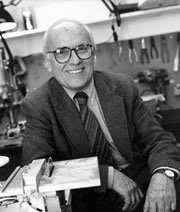 Miguel Milá, an interior designer, inventor and bricoleur, and a pioneer in his field in Spain, began working in the 1950s. With objects, resources and raw materials hard to come by at that time, Milá started designing his own furniture and lamps and soon set up his own company, Tramo (from the Spanish Tra-bajos Mo-lestos, ‘Annoying Jobs’). Many of his pieces have become true contemporary classics. In 2016, the Spanish Ministry of Education and Culture in Spain awarded him the Gold Medal for Merit in Fine Arts. He has won numerous ADI awards (Barcelona), the first Spanish National Design Award (tied with André Ricard), and the ADI Compasso d’Oro for Lifetime Achievements. Miguel Milá was born in a Catalan aristocratic family with strong links with the artistic world (his ancestors assigned the Milá House, also known as La Pedrera, to Gaudí), and started working as an interior designer in the architecture studio of his brother Alfonso Milá and Federico Correa. It was the end of the 50s, a time of crisis when Spain hardly knew what industrial design was. There was practically no industry, everything was generally handmade. This framework marked the way Miguel Milá understood design, being sensitive to the pleasure of touching and closer to traditional techniques. Despite the shortage of objects, means and raw materials of the time, Miguel Milá started designing lamps and furniture, that he soon manufactured in his own company, Tramo. Miguel Milá set up this company with two friends, architects F. Ribas Barangé and E. Pérez Ullibari. This is how Miguel Milá got involved with industrial design.Out of Tramo, apocopation of Trabajos molestos (annoying works, that is, all the things little brothers have to do), many projects came out. For instance, he developed the previous versions of the famous TMC and TMM lamps (1958 and 1961), timeless classic designs that are still selling nowadays. Some time after, he set up his own industrial and interior design studio. Miguel Milá participated with the designers and architects of that period in the first meetings in Barcelona to discuss on modernity in architecture, out of which came the question of how to promote design and implant its professional practice. These meetings culminated in the foundation of the ADI-FAD, together with Antoni de Moragas, André Ricard, Bohigas, Cirici Pellicer, Manel Cases and Rafael Marquina. From its beginnings, this association sought to foster Spanish design abroad, and to make a connection between young Spanish professionals and international design. “I am in reality a pre-industrial designer- has Milá stated-. I feel more comfortable with the technical procedures that allow correcting failures, experimenting during the process, and controlling it to the maximum. That is where my preference for noble materials comes from, the preference for materials that know how to age.” This is the case, among others, of the wooden Cesta lamps (1964), the reed Manila lamp (1961); the M68 lamp, made out of aluminium (1968); or the lamp series Americana with natural linen shades. After a period of silence that coincided with the crazy postmodern 80s, during which he focused on designing interior spaces and exhibitions, he took up his industrial designing projects again, with a more modern and rationalist language, and applied it to urban design. The Neoromántico bench (1995) is a clear example of this, being a bench that in a few year has become usual in urban sceneries. To this first bench have followed the Neoromántico pata liviana (2000) and the Neoromántico aluminio pata liviana (2002). Miguel Milá has come to be a classic figure in design. In fact, he almost represents the history of Catalan modern design. His work has focused on bringing tradition up to date: many of his products have overcome the circumstances under which they were made, and are still selling nowadays, “thanks to having been born at a time when rigor and honesty were high values”, states Milá. In 1987, he was awarded with the Premio Nacional de Diseño and in 2008 reward the Compasso d’Oro in recognition of his career history and his contribution to the promotion of Spanish design. Más información: www.miguelmila.com