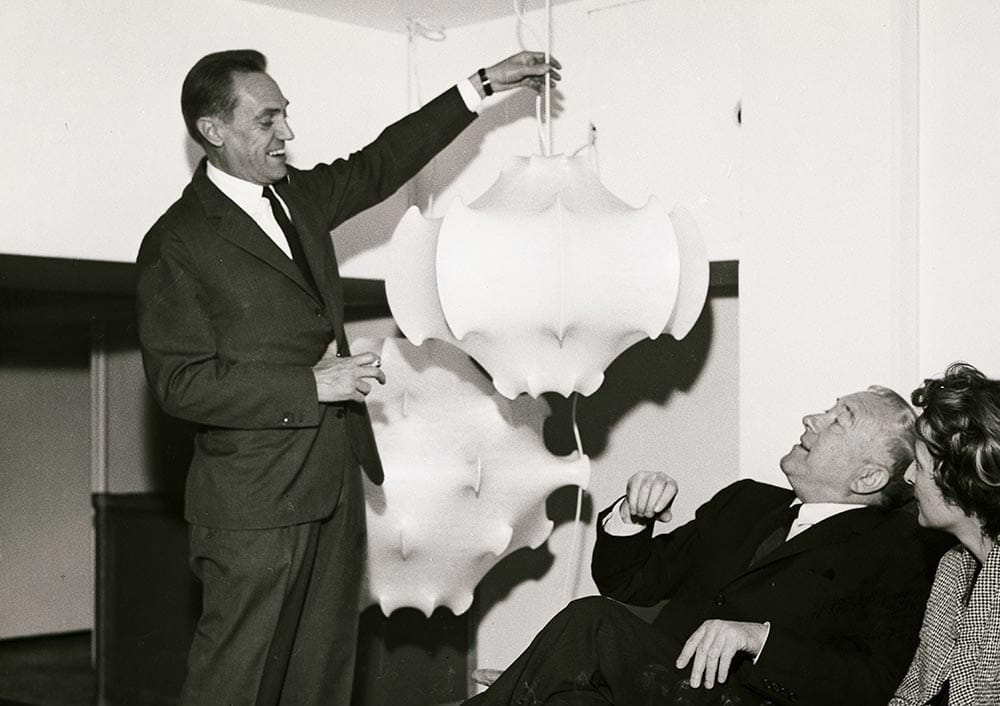 He is the maestro of design. He was described by Italian businessman and design visionary Dino Gavina as “one of the top 10 designers in history.” Along with his brother, Achille Castiglioni, he invented many pieces of furniture and light that were perfect examples of design classics when they were created and continue to be in style to this date – a case in point being the Arco floor lamp they designed for FLOS. He is the pedigree designer Pier Giacomo Castiglioni, the mere mention of whose name commands awe and respect in the design community. Born on April 22, 1913 in Milan, Italy to sculptor father Giannino Castiglioni and mother Livia Bolla, Pier Giacomo Castiglioni was the second of three brothers. Like his elder brother Livio and younger brother Achille, Castiglioni was also an architect.nHe graduated from the renowned Politecnico di Milano in 1937 and soon after started an architectural design practice with his older brother Livio. The youngest of the Castiglioni brothers, Achille joined their practice “Architecture, Urban Buildings and Research into Industrial Design” after he graduated in 1944 and the three of them worked on a number of projects together. The most famous of them being the reconstruction of the Palazzo della Permanente, which had been destroyed in a bombing in 1952-53, during the second world war…After their oldest brother, Livio, left the practice in 1952 to pursue other interests, the two younger Castiglioni brothers, Pier and Achille, worked as a team and soon became an unstoppable design force. Their vision was so in sync that it was impossible to attribute the designs they created together to one or the other. They made many purists uncomfortable with their vision of modern lifestyle at the exhibition of their “Colori e forme nella casa d’oggi” (Colors and Forms in Today’s Home) in 1957. Their colorful jumble of styles which incorporated old and new furnishings instead of uniformly-styled interiors antagonized many specialists of the time. While Pier collaborated with his brother on a wide variety of projects, their contemporary lighting products for brands like FLOS, Arredoluce, and Artemide were particularly successful. Their focus on producing highly functional lights that were as practical as they were aesthetic raised them to design stardom. Pier along with his brother Achille designed many bestsellers for FLOS aside from their most famous creation the Arco floor lamp. The Taraxacum, Splügen Bräu, and Viscontea hanging lamps; Gatto, Taccia, and Snoopy table lamps; and the Toio floor lamp designed by the two brothers when they were at the peak of their career continue to be part of the FLOS collection today. Such was the talent of Pier Castiglioni that he received many awards and prizes in his lifetime including six “Compasso d’Oro.” Many of the designs that Pier created are part of the exhibits at the Museum of Modern Art in New York, Royal Institute of British Architects in London, Musée des Arts Decoratifs in Paris, Palais du Centenaire in Brussels, Modern Art Museum in Sao Paulo, Brazil, Prima Esposicion de disegno industrial di Buenos Aires, Argentina, and the Triennale Design Museum in Milan. Pier also taught life drawing at his alma mater Politecnico di Milano from 1964 until his untimely demise in 1968. His work, however, continues to live on and inspire generations of designers in Italy and the world over.